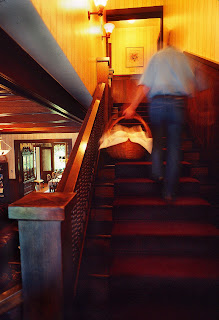 Returning guests here for their 44th wedding anniversary and their 17th return stay with us came down to the kitchen after breakfast this morning and said that this morning’s breakfast was the best they had ever had! What a compliment and we want to share the entrée recipe with you.

This morning the breakfast that was delivered to each suite was Ham Potato Cheddar Strata, Blueberry Crisp, Apple Scones with Maple Butter, Lemon Breakfast Cake, Orange Juice, Coffee and Tea.

The word “strata” means layers and in this recipe layers of potatoes, ham, fluffy, rich egg custard and creamy cheese are sure to delight. We sliced the ham and potatoes on our meat slicer to get them a thin and uniform consistency.

Preheat oven to 350 degrees. Whisk the eggs with the cream in a bowl and set aside. Have the shredded cheese and chopped ham ready to go. Slice the potatoes with a slicer or very sharp knife so that the potato slices are consistent in thickness so that they cook evenly.

Coat a 13″ by 9″ glass cake pan with non-stick spray. Cover the bottom with a layer of potatoes, overlapping slightly (or “shingling”). Add a layer of ham and cheese. Repeat these steps until the pan is full, finishing with a ham and cheese layer on top. Pour the egg and cream mixture over the top and tap the pan gently to settle the liquid. Season with pepper to taste.

Cover with foil and bake for about one hour and 45 minutes. Remove foil for the last 15 minutes to brown. Check to see if the potatoes are cooked through by poking a fork in the middle of the strata. If there is resistance, they’re not done.

Slice into squares and serve!

We would like to be your hosts for your next anniversary, honeymoon, birthday, vacation, or romantic getaway. Make your plans now to stay with us. Our food will delight you, our fluffy feather beds will comfort you, and as the fireplaces glow, the Firelight atmosphere will soothe your soul!

Joy and Jim Fischer, Innkeepers/Owners
“Let the warmth of the firelight surround you!”